Following an upward revision to March’s jobs numbers, Maine’s unemployment rate was “essentially unchanged” at 3.3 percent in April, according to the Maine Department of Labor (MDOL). The MDOL reports the unemployment rate decreased and averaged 3.6 percent over the last three-months.

The state has gained an average of 3,400 jobs in each of the past three months, between February and April, over the prior three months.

According to the MDOL, 22,600 people in the state were unemployed in April, the lowest number in 29 months. The state’s labor force participation rate was at 59 percent and the employment-to-population ratio was 57.1 percent, both “little changed” from the previous month.

For the three month period between February and April, the 3.6 percent average unemployment rate was 0.6 percent lower than the three-month average for the preceding three-month period, ending in January. Similar to estimates specific to the month of April, the average labor force participation rate and employment-to-population ratios during that span were little changed.

The MDOL also reports that total nonfarm wage and salary jobs decreased by 200 to 639,000 in April. March’s number of nonfarm wage and salary jobs, previously estimated at 638,700, was revised upwards by 800 jobs. The agency reports gains in the leisure and hospitality and healthcare and social assistance sectors were offset by losses in the retail trade and professional and business service sectors.

The April 2022 jobs release marks two years since the COVID-19 pandemic first affected the job market and drove significant losses in April 2020. According to the MDOL, the three-month job average through April 2022 was 0.1 percent higher than the average for 2019, which was the last full year before the pandemic.

Also in April, the state’s average for private sector hours was 33.9 and the average hourly earnings were $22.84. Hourly earnings increased by an average of 7.5 percent from the previous year, driven by a 13 percent gain in earnings in the leisure and hospitality sector. According to the MDOL, the sector with the highest earnings was professional and business services while leisure and hospitality had the lowest earnings. 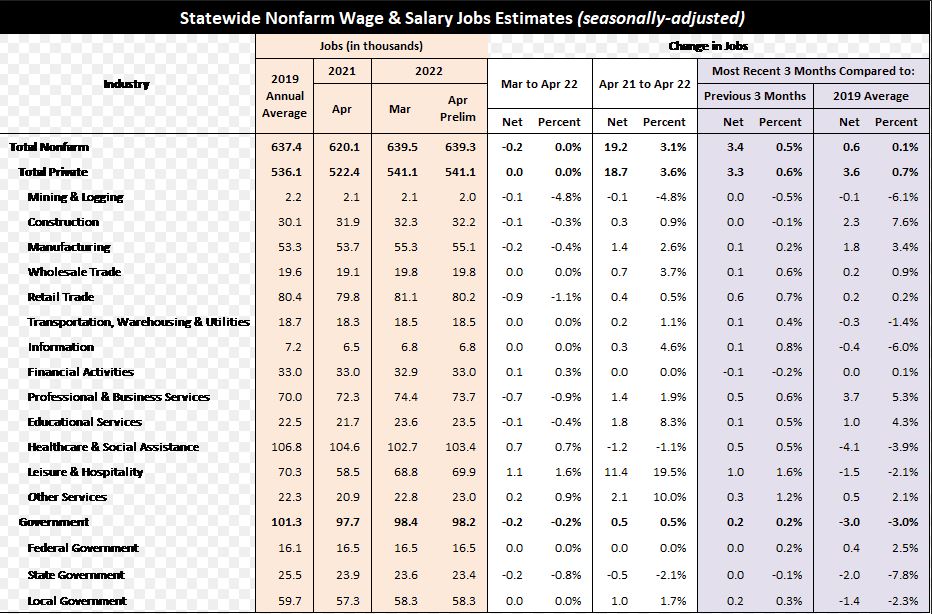