A recent Ipsos poll asked 1,001 Massachusetts adults about a number of issues, including their thoughts about ranked-choice voting (RCV). The online poll, conducted in conjunction with Spectrum News, reached voters across the Bay State, finding that 45% support RCV, while 34% oppose it. Considering the authors’ “credibility interval” of between 3.5% and 5%, the race could be within only a few percentage points.

Ranked-choice voting is a method of voting in which voters may rank candidates on a grid-style ballot. If no candidate receives over 50% of first choice votes, voters’ second choices are reallocated to the remaining candidates, and so on, until a candidate has received support from over 50% of the outstanding, non-exhausted ballots.

Voters in Massachusetts will decide on Question 2 this year, which proposes to establish RCV for all state-level races beginning in 2022. Voters in Alaska are also weighing the pros and cons.

Respondents were asked “How much do you support or oppose…Ranked-choice voting, where voters rank-order candidates by preference on their ballots, for state-level elections[?]” The results are as follows: 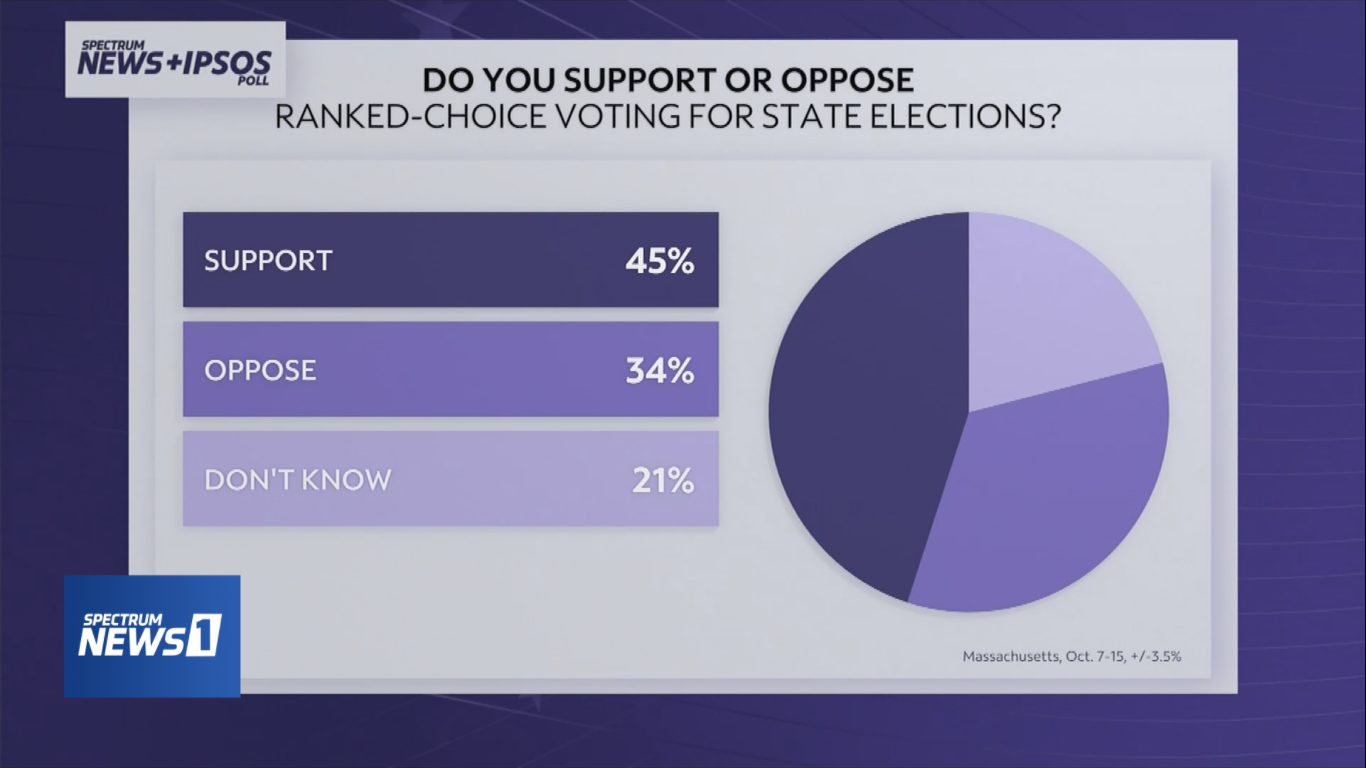 What’s the kicker? One-in-five Massachusetts voters “don’t know” where they stand, which is enough to make up the difference between the “Yes” and “No” camps.

What’s more, less than half of those in favor say they “strongly support” switching to RCV elections, whereas more than half of those against it are strongly opposed. This could indicate support for the measure is “softer” than it appears, leaving an opening for opponents to persuade undecided voters to break their way.

The results are especially notable since this particular race has seen immense out-of-state interest. Proponents have accumulated nearly $10,000,000 in campaign cash, only 16.5% of it from Massachusetts residents. Almost 60% came from just two sources. Compare that to the coffers of the “No on 2” campaign, which has raised less than $5,000.

Conventional political wisdom says that a 2000x funding discrepancy should doom the underdog. There is no doubt that opponents are on unequal footing, but Massachusetts voters are expressing healthy skepticism, leaving the race within striking distance.

Given the many perils of ranked-choice voting, seen in the experience of Maine and other jurisdictions, it’s clear that voters should see through the debunked claims of proponents. Leaders across the political spectrum oppose it, and areas such as Pierce County, WA, Aspen, CO, and Burlington, VT—repealed it soon after enactment.

With Election Day only days away, one thing is certain: Massachusetts voters will have the final say on this question. At this point, many are still wary of this unproven electoral experiment.