Universal health care is one step closer to becoming a reality in Maine.

LD 1045, sponsored by Rep. Heidi Brooks (D-Lewiston), a law that supports the eventual universalization of health care in Maine, made its way through the legislature this session.

LD 1045 became law without the signature of Gov. Janet Mills on July 1.

The original version outlined a detailed plan for the proposed takeover of Maine’s health care system, but the final version has two main provisions: the new universal “Maine Health Care Plan” and a new board established to develop and implement that plan.

The bill’s only language regarding the scope of the plan is that it will “provide for all medically necessary health care services for all residents of the State.” It notably goes no further in defining “medically necessary.”

That description is very vague and unclear as to what exactly would be covered under the plan, as well as what options individuals would still have for needs not deemed “medically necessary.”

Either way, a state takeover of the health care system is very unlikely to solve the problems Maine faces. A one-size-fits-all, top-down approach is not the answer.

We can all agree that the current system of health care is dominated by unjustifiably rising costs and increasing barriers to care, both in Maine and across the nation. But the government seizing control of the entire market would eliminate viable choices that may prove more cost-effective and preferable, like direct primary care, to thousands of Mainers. 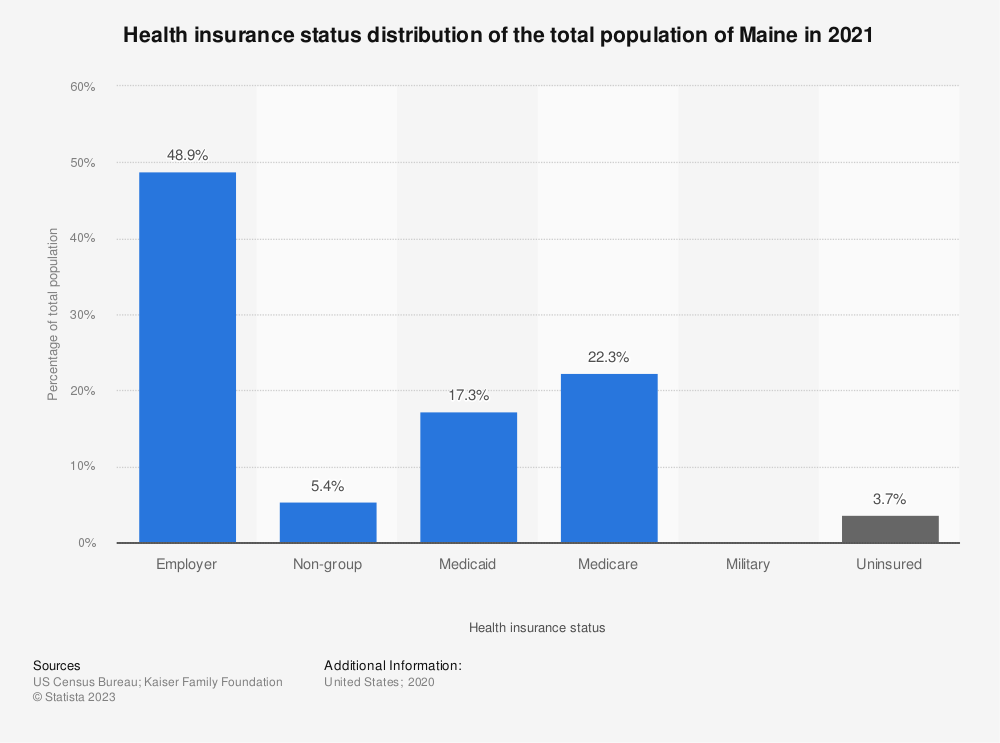 As shown above in this graph from Statista based on 2019 data, only 8% of Mainers were without health insurance. This metric certainly does not warrant a state takeover of the entire health care market that would limit the choices of the other 92%.

The government should allow for a health care market that is increasingly manageable, affordable and provides as many options to Mainers as possible. A universal plan would likely make these priorities unattainable.

The lion’s share of the bill details how the “Maine Health Care Board” would be created, consisting of 17 members appointed by the governor, including five “employer members” and seven health care providers.

It adds an unconscionable level of bureaucracy to an already unprecedented expansion of government power.

The bill notably will only take effect, though, if the federal government passes legislation that allows states to obtain a waiver that would allow them to run a state-based universal health care plan that uses federal funds. So for now, the plan is essentially moot, but it will surely surge back into relevance if and when Congress passes that kind of legislation.

In the bill’s fiscal note, the only number that is mentioned is $10.9 billion. That is the Department of Health and Human Services’ estimate of the annual cost of “covering all medically necessary health services.”

$10.9 billion per year is a shockingly high number, especially when taken in the context of the $8.5 billion budget lawmakers recently passed to direct spending over the biennium.

Such a steep cost would surely demand additional state revenues in the form of increased taxes on hardworking Mainers.

In 2011, the Vermont Legislature enacted a law that established a universal health care system. It required a funding proposal to be developed within two years, but lawmakers failed to meet that deadline.

The Boston Globe reported the plan “would nearly double the size of the state’s budget in the first year alone and require large tax increases for residents and businesses.” A similar outcome is all but guaranteed for Maine if such a plan to enact universal health care is approved in the future.

LD 1045 sets the stage for a disastrous and expensive government takeover of Maine’s health care system, destroying viable and flexible options used by tens of thousands of citizens. Mainers must now watch with a careful eye as health care legislation maneuvers its way through Congress in the future.