AUGUSTA – The Maine Republican Party has issued the first edition of what it says will be a series of memos about GOP candidates and their opponents. The subject of the first memo, published Wednesday morning, is Republican Gov. Paul LePage’s successful push to payoff more than $500 million in medical welfare debts owed to Maine’s hospitals.

The memo begins in 1980 when, according to the GOP, Maine first began the payment system that ultimately enabled the massive debt to accumulate.

“In 1980, Maine began a system of paying hospitals a set amount monthly for Medicaid services rendered, settling up at the end of the year for any additional money owed. These payments were called “Prospective Interim Payments” (PIP),” the memo states. “The PIP system worked alright until Maine started rapidly expanding Medicaid in the late 1990s and early 2000s to people who were not eligible under federal requirements.”

Democrat candidate for governor Michael Michaud supported the early expansions of Medicaid that led to an explosion of hospital debt and has stated multiple times that the first thing he plans to do if elected is expand Medicaid eligibility yet again.

The memo appears below in full:

In 1980, Maine began a system of paying hospitals a set amount monthly for Medicaid services rendered, settling up at the end of the year for any additional money owed.  These payments were called “Prospective Interim Payments” (PIP).

The PIP system worked alright until Maine started rapidly expanding Medicaid in the late 1990s and early 2000s to people who were not eligible under federal requirements.  Current Democratic gubernatorial candidate Michael Michaud ushered one of these expansions through the state legislature as senate president in 2001 (LD 1303, 2001).  From 1997 to 2012, state Medicaid spending in Maine soared from $372 million to $967 million and enrollment doubled to over 340,000, ranking Maine third in the nation for the percentage of population on Medicaid. (See below chart from the Bangor Daily News; click for interactive graphic.) 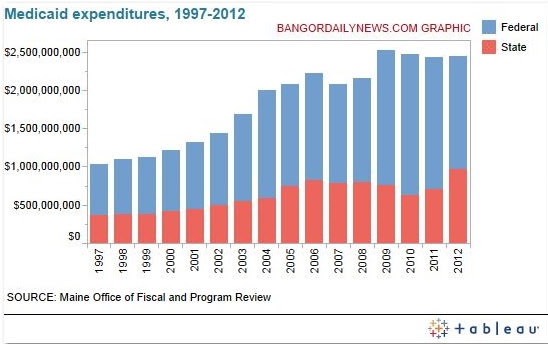 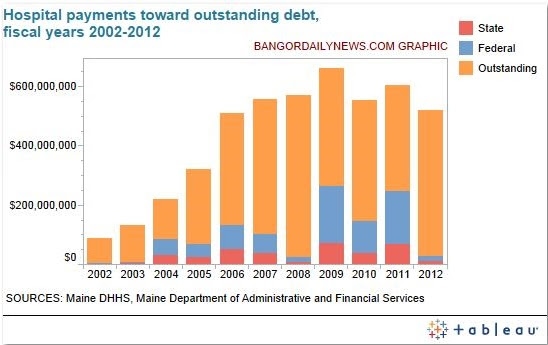 During his 2010 campaign, Governor Paul LePage promised to pay off this massive hospital debt.  In 2011, LePage and the Republican-controlled legislature enacted a budget that paid off $247 million of the debt using a combination of state funds and federal matching funds.  At the beginning of 2013, however, $484 million in Medicaid hospital debt remained.

At the same time, Maine’s state-owned liquor business was up for renegotiation.  In 2004, Democratic Gov. John Baldacci had sold rights to the state liquor distribution business to a Massachusetts company in a 10-year, $125 million firesale in order to plug a one-time hole in the state budget.  Baldacci faced criticism for the bidding process and the bargain basement sale price.

When it came time to think about putting the state’s liquor business up for bid in late 2012, by all accounts, from state officials to local liquor store owners and even Democratic lawmakers, the state had been ripped off by the Baldacci deal.

The company operating the liquor business offered a guaranteed $320 million for a renewed 10-year contract in 2013 — over twice as much as the state had realized under the Baldacci scheme.  But Gov. LePage said the contract was worth more and immediately rejected the offer.  According to state liquor chief Gerry Reid, if the state had managed its own business in 2012, it would have realized $46 million in profits.

It was then that Gov. LePage unveiled a “creative and brilliant” plan to help the state realize the full potential of its liquor business while paying off Maine’s hospital debt in full and for good.  The first part involved “insourcing” the liquor business so that, using the Administration’s business-oriented approach to governing, the state could realize the profits itself.  The second part was selling a $180 million revenue bond on future profits in order to pay off the state’s share of the hospital debt, leveraging another $300 million in federal matching funds.

Revenue bonds, unlike general obligation bonds, are tied to a specific revenue source and therefore do not affect the state’s credit rating or general borrowing capacity.  Dedicating the liquor revenue to making the bond payments also put the revenue stream in a “lock box” that the legislature could not touch.

Meanwhile, Republicans in their 2011 state budget finally funded the mechanism to eliminate the PIP payments to hospitals and instead institute a “pay as you go” system that prevents hospital debt from accruing in the future.  Democrats quickly tried to claim credit for coming up with the idea back in 2009, but as the hospitals’ government affairs representative told the Bangor Daily News in March 2013, “It’s one thing to build the machine, it’s another to start sending money through it.”

Governor LePage announced his plan in January 2013, setting up a series of events that would become perhaps the greatest testament to LePage’s tenacity in achieving the best possible result for the people of Maine.

The Republican resolve was made clear in a first-ever “veto ceremony” of the merged Medicaid expansion bill featuring Gov. LePage flanked by GOP lawmakers in the State House’s Hall of Flags.  Republican lawmakers sustained the veto and Democrats reluctantly agreed to pass the Governor’s original proposal without conditions.  Despite the months-long struggle to pay off Maine’s hospital debt and ensure responsible management of the state’s liquor business, Gov. LePage signed the bill in private and without fanfare.

Gov. LePage told the Maine Center for Public Interest reporting that paying off the hospital debt was his proudest achievement because of the difficulty he faced in pushing it through the Democrat-controlled legislature.

The battle, however, is far from over.  Congressman Michael Michaud, a man who contributed so greatly to the accrual of Maine’s hospital debt, vowed to introduce a Medicaid expansion bill on day one if elected governor in 2014.  Democratic state lawmakers never proposed a funding mechanism for Maine’s share of ObamaCare’s welfare expansion because they refused to even acknowledge a cost.  However, Senate President Justin Alfond back in 2008 provided us with one idea that Democrats have used before: “We might have to stop paying the hospitals.”