The U.S. Centers for Disease Control and Prevention on Friday released a report on the state of mental health among American adults, providing a closer look into the effects of statewide economic shutdowns in response to the spread of COVID-19.

The survey was conducted during the last week of June 2020, sparked by a marked increase in symptoms of anxiety disorder and depressive disorder from April to June 2020 compared to the same time frame last year. Of all those surveyed, over 40% reported experiencing at least one adverse mental health condition related to the pandemic.

Among the most startling findings, the researchers reported that 11% of American adults have “reported having seriously considered suicide in the 30 days before completing the survey.” This feeling was expressed much more among certain demographic groups. Over one-quarter of those aged 18-24 (25.5%) reported experiencing suicide ideation in the last 30 days. Over 30% of unpaid caregivers of adults and over 21% of essential workers also reported contemplating suicide.

Over 13% reported “having started or increased substance use to cope with stress or emotions relate to COVID-19.” Dovetailing with spiking deaths due to drug overdoses this year, this new survey from the CDC could shed light on some of the factors at play.

The survey found that racial and ethnic minorities were more likely to report experiencing adverse mental health effects from the wake of COVID-19. Hispanic respondents reported higher instances of suicidal thoughts (18.6%), substance use, or other symptoms of anxiety or depression than non-hispanic white respondents. Black respondents reported higher substance use and serious contemplation of suicide within the previous 30 days (15.1%) than did white or Asian respondents.

Black and Hispanic Americans in the aggregate, in addition to experiencing the adverse mental health effects of the lockdowns, have also been disproportionately affected by the virus itself. Even in Maine, where Black residents, despite making up only 1.34% of the state’s population, are nearly 22% of COVID-19 cases. This is a result of many factors, economic and social, that CDC breaks down on a health equity information page.

A study in the New England Journal of Medicine that examined patients in Louisiana found that, “76.9% of the patients who were hospitalized with Covid-19 and 70.6% of those who died were black” even though Black residents only comprised a little more than 30% of the studied population. Although Black Americans have experienced disproportionately greater hospitalization and death from COVID-19 overall, the study found that, “after adjustment for differences in sociodemographic and clinical characteristics on admission,” that Blacks did not experience greater in-hospital mortality rates than whites.

As American society grapples with policymakers’ choice to impose harsh, draconian lockdowns on all of society in an attempt to curb the spread of COVID-19, the costs and consequences of this unprecedented policy decision are just now beginning to be seen.

Widespread shutdowns have not only caused huge economic costs, they have disturbed the mental state of thousands of Americans, many at much higher risk of anxiety, addiction, or depression than the virus, especially young adults.

The ubiquitous closures of charities, arts and cultural institutions, and the suspension of in-school education have cut to the core of the innate human need for social interaction. We truly are social creatures, and this pandemic and ensuing lockdowns have shown us how much of that enormous evolutionary drive we take for granted.

Public health and economic health are intricately bound in our society. Let this grand, failing social experiment be our lesson for the future. We can never again allow the sacrifice of social cohesion at the altar of centralized government authority. It simply is not worth the cost.

If you or someone you know is suffering from depression or suicidal thoughts, help is available. Call 1-800-273-8255 or visit suicidepreventionlifeline.org. Drug and alcohol addiction resources are also available through American Addiction Centers. 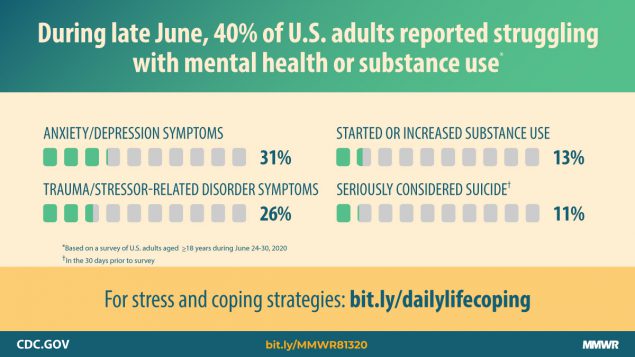