According to Kelli Deveaux, communications director for the Maine Department of Education (DOE), COVID-19 had a significant impact on “nearly every routine of Maine schools and students.” Deveaux added the data on truancy rates for the 2020-2021 school year “must be considered through a lens that reflects disruption, fear, and a pandemic.” 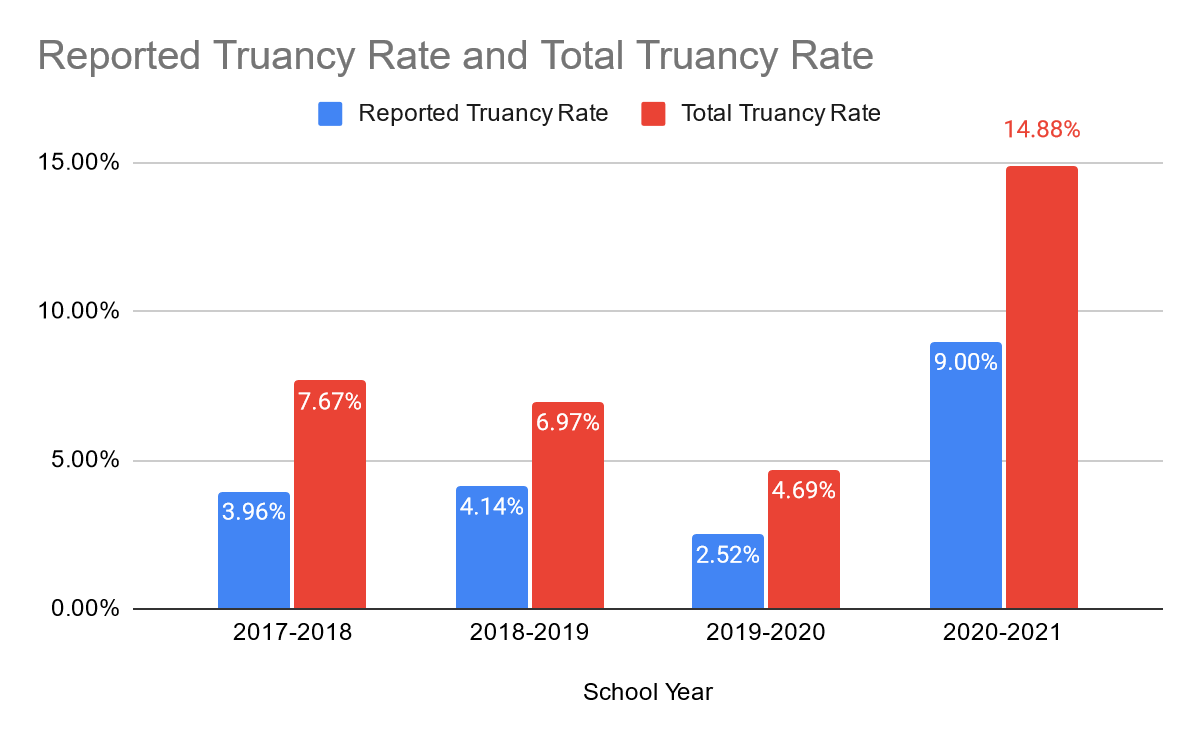 Truancy has several different thresholds in Maine, depending on the age of the student and the grade level he or she has completed.

Students who follow under the truancy threshold can be labelled chronically absent, a rate which also increased statewide, from just over 18% during the 2019-2020 school year to just over 21% during the 2020-2021 school year. Data for truancy and chronic absenteeism is not yet available for the 2021-2022 school year.

Unlike truancy, chronic absenteeism does not take into account excused versus unexcused absences. Excused absences do not contribute to a student being deemed truant.

According to Deveaux, changes to remote, hybrid, and in-person learning during the pandemic meant definitions of whether a student was considered “present” for school on a given day had different meanings during the 2020-2021 school year.

“What was defined as ‘present’ varied, and could be determined by logging into a portal, submitting a certain amount of work, or some other method; as a local control state, attendance taking procedures have and continue to be locally determined and therefore variable,” said Deveaux.

New methods for taking and reporting attendance may have affected student attendance. Other factors contributing to increases in truancy could be related to stress and anxiety. Parents working from home, or tending to the health of family members, may have led to some parents forgetting to phone their child’s school and report an absence.

For some families, engaging in school from home was fraught with barriers, including “connectivity or a parent’s capacity to be present or to support a child with engaging with their learning. We also know that a family’s health directly relates to a child’s ability to attend and function in their school environment,” Deveaux added.

Parental concerns about masking policies, or exposure to illness their children might face in in-school settings, may also have contributed to unexcused absences.

“Parents who were fearful of sending their child into a school setting for fear of illness, or those who refused to send their students for fear of a mask, would not have met the statutory definition of excused absence, and would therefore be considered truant,” Deveaux said.

While the state collects information on the number of truant students, truancy is addressed at the local level. Once a student has been identified as truant, state law requires the superintendent of the school district the child attends be notified within 5 days of the last unexcused absence. School personnel then work to develop an intervention plan to address unexcused absences.

If a student’s absences persist, the superintendent is then required to inform parents of their child’s legal requirement to attend school and must schedule at least one meeting with parents to address the truancy. The superintendent must also notify the school board.

If a student still remains truant, the superintendent then involves local law enforcement.

In June 2021, the Maine Legislature passed a resolution directing the Advisory Committee on Truancy, Dropouts and Alternative Education to study the state’s truancy and absentee data. The committee is required to develop a report, which is to include recommendations on how to improve school attendance, and submit it to the Committee on Education and Cultural Affairs by no later than February 1.